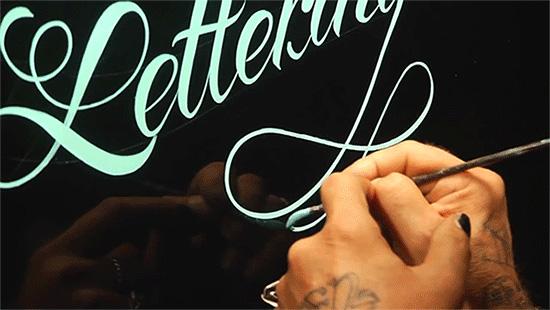 In 1980, when I graduated from high school, the sign business was a lot different than it is today.

Signs were mainly hand-painted, or air-brushed.  Sho-card brushes, daggers for pin-striping, Sign Painter’s One-Shot, lacquer thinner, turpentine, silk-screens … those were the tools of the trade.  (That’s not me in the picture, but I used to do that sort of lettering all the time – after four moves and three decades I don’t believe there are any pictures of me doing any hand lettering still around.)

If you’d told me in 1980 that one day almost all signs would be printed on a computer or cut out of vinyl that came in 50 yard rolls, I wouldn’t have believed it.  But – that’s exactly what has happened.

There are still hold-outs and those who do things “the old way”.  There is still a thriving group of “Letterheads” who hold annual meet-ups and celebrate the way things were.  I have met some of them, and most of them are amazing artists.

I joined the “computer age” in 1989, when the price of the new-fangled plotters came down to around $10,000 and I could finally justify the investment.  (When they first came out, plotters ran around $100,000 and only cut about 12″ tall lettering … and they were S-L-O-W-W.  Nothing like the huge, fast machines they have today.  And, the idea of a machine that could print a billboard-sized banner, or vinyl wide enough to wrap a city bus?  It seemed like science fiction.

Where will the sign business go in the next 30 years?  Holographic and 3-D signs are already on the horizon.  I can’t begin to imagine.